On the afternoon of 1 October 2017, the La Vanguardia, the most popular newspaper in Catalonia, ran the following story (2):

“The upsetting account of XX is one of the many stories that highlight the violence with which the officers of the National Police and Civil Guard acted on Sunday in different parts of Catalonia. The event occurred at the Pau Claris school in Barcelona’s Ensanche neighbourhood.

“Listen Laura, I was defending the old people because they were hitting children, hitting old people. They threw me down the stairs, kicked me and broke my fingers one by one. In the middle of the staircase with my clothes pulled up, they groped my boobs and laughed, and they hit me, and all this while everyone was filming them. Report that and let the whole world know. They broke my fingers one by one. That’s great wickedness, lots, lots…”

The article finished as follows: “…Despite everything, both Government Delegate in Catalonia Enric Millo and Vice-President of the government Soraya Sáenz de Santamaría considered that the police intervention was ‘professional and proportional’.”

The video published in the same article does not back up such a tremendous accusation.

Most of the readers decried the story.

And seemed to feel that the images suggested quite the opposite:

“Listen Laura, I was in front of those attending, most of them standing, others sitting, organising the vote with an ID card hanging from my neck, when they threw me out because I was an organiser.

Given my resistance, they dragged me to the edge of the stairs and hauled me down to the street, gripping me tightly by the hands.

They caused swelling on one of my fingers and it’s all on film.

Ah, and of course, even though I was taking part in an act of secession, they didn’t arrest me!

BUT PLEASE DON’T LET THE FACTS GET IN THE WAY OF A GOOD STORY!

Naturally, our infallible and experienced Barcelona mayor couldn’t give up the chance to pour petrol on the (heaven-sent) flames (5).

To ask journalists, professional opinion makers, well-known sports personalities and distinguished officials to check the authenticity of a story.

Or braver still, to talk about facts instead of yelling into the void.

Even when the star of the story made herself fully available, making constant public statements immediately after the incident.

Don’t be fooled; seeking out and spreading the truth would erode their power.

WHERE THERE’S VICTIMISM, IT’S ALWAYS THE OTHERS WHO PAY FOR IT

Because when people declare themselves victims, they’re automatically creating culprits.

It would be foolish not to learn from all the experience gained in the Basque country.

From what Basque society suffered and from the forty years it took the Basque institutions themselves to identify where the true aggression was coming from and to convince the population.

Not so long ago, the brother of a man assassinated by ETA in San Sebastián cursed the terrorists, calling them enemies of the Basques and murderers of their own people.

Because the members of ETA, convinced that they were victims of the system, converted the rest of the Basque population into the cause of their woes. Silencing them, calling them fascists and killing them regularly.

According to the Foronda report published by the University of the Basque Country, the total number of ETA’s recognised victims stands at 845, of whom 75%, or 637 people, were killed in the Basque Country itself.

It is also important to add the further 709 that it crippled and the somewhere between sixty and two-hundred thousand people who were forced to leave (6).

It is clear who the real victims and who the aggressors were.

The violence in the Basque Country was extreme, and hopefully will never be repeated, but in Catalonia (where there previously existed not one but three bloodthirsty terrorist organisations in the 1980s, 8), a deep social divide has formed where one didn’t exist before.

Thanks, among others, to the La Vanguardia newspaper and its advocacy of hate as a means of rallying society.

The paper reproduced this foul lie on Monday, Tuesday and Wednesday in amongst beauty and slimming tips. 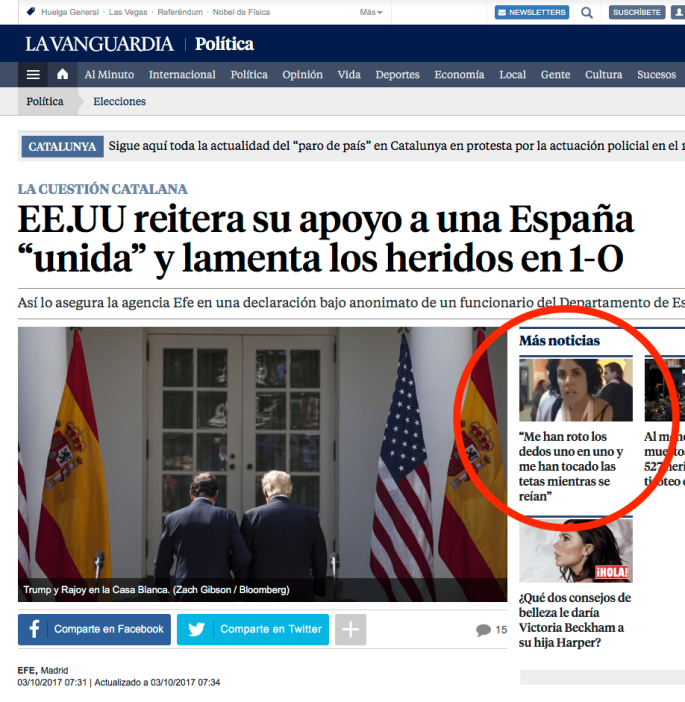 And it probably expects us to give credit to everything else it printed about 1 October as well.

These people are motivated by an alternative worldview. Their goal is power. They don’t care how they get it.

These are their truths:

Time for calm and conviction.

EVENTS AS THEY ACTUALLY OCCURRED

I have been gathering notes from different places in order, a few days later, to complete the story.

Here it is, alongside the proven facts and their references.

“Listen Laura, I was (organising the vote with an ID card around my neck) defending the old people because they were hitting children, hitting old people (false: the video only shows people sitting or standing around while they throw the organiser out). They threw me down the stairs (false: they drag her to the edge and then haul her downstairs by the hands), kicked me (false: that’s not in the video or the hospital report) and broke my fingers one by one (false: one swollen finger). In the middle of the staircase with my clothes pulled up, they groped my boobs (false: not in the video) and laughed, and they hit me (false: not in the video. Later she left the building and even though she was identified as a coup organiser, she wasn’t arrested), and all this while everyone was filming them (true: and quite right, to prevent police abuse). Report that and let the whole world know. They broke my fingers one by one. That’s great wickedness, lots, lots… (True: but not with reference to the police officers, but to her…)“.

But there are even more facts and pictures.

XX is a councillor for Esquerra Republicana de Catalunya (Republican Left of Catalonia), the party spearheading the secession movement, in Gallifa (Barcelona province).

Before organising polling on the day of the referendum, XX took part, with obvious glee, as the picture below shows, in blocking the path of and attacking the cars of the Civil Guard, who were executing a warrant at a tax office on 21 September (11).

She wasn’t arrested for that offence either.

But that’s not all.

A few days later, a second video emerged showing her in a frenzy as she left the polling station after being thrown out and shrieking at other members of Esquerra waiting outside.

Her tirade, which she screamed just a few minutes after she was allegedly assaulted, contained the following sentences:

Note the use of the singular: “my finger”. They hadn’t broken four of her fingers one by one.

Just one and it wasn’t even broken; she was holding her purse in her injured left hand.

When she spoke to the media, repeatedly maintaining that “they broke my fingers one by one, while they groped my boobs and the police laughed“, she was not speaking in the emotion of the moment.

As the above video shows, she was well aware that only one of her fingers hurt; it took just four days to fully heal.

No, she wasn’t caught up in emotion. Just amorality, hatred and opportunism.