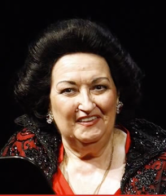 In Catalonia, we have been witnessing the socially and culturally dominant hegemony of nationalism and a regime which exerts unseemly psychological and moral influence over society for forty years now.

‘There is nothing to say  –but I will say–a little bit more Catalan wouldn’t have gone amiss.’

This is just one example of many of how the constant manipulation by nationalist power groups finds its way into even the most intimately personal acts.

Even when it is not subjected to direct action of any kind, this power is exercised by simultaneously imposing certain forms of social behaviour and discrediting dissidents.

What they are doing is trying to impose nationalist dogmas or standards on the citizens and, in return, they will spare them the grief of confrontation and public condemnation.

Nothing could be more legitimate than Montserrat and her family’s decision, their personal right, to hold the funeral entirely in Castilian.

For many Catalans, Spanish is just as much Catalan as Catalan is itself. They have grown up and lived in the language and consider it their own.

But there is more to this matter than a mere expression of intolerance.

A darker undercurrent runs beneath incidents of this kind, as came to the surface in an interview in the ABC newspaper:

‘I remember a mayor of Barcelona who offered me the chance of founding a great school of singing and performance… Just then, the mayor was transferred to Madrid (Narcís Serra 1979-1982?), but before leaving, he told me to talk with his successor, for such a project just couldn’t come to nothing.’

‘But the new Minister of Culture said that the plan involved too many “foreign artists”, by which he meant non-Catalans.’

‘That wasn’t the first time something like that had happened to me. At a dinner I attended with my husband —from Aragon—, that same politician (Max Cahner?) said: “Monserrat’s only sin is that she married a foreigner.”’

There is a video of an interview held on 13/09/2013 with Mari Cruz Soriano as part of her chat show ‘Charlas con Valor’ in which Montserrat went into a little more detail.

‘I’ll never forget a very important Catalan Government dinner. My husband and I were eating with the president and his wife … and the Minister of Culture said, and don’t think I hate him, that I was a universal Catalan, an ambassador for Catalonia, and so on, and that my only fault was that I had married a foreigner. I found that pathetic.’

‘I cannot comment on those who impose chains, because it pains me (referring to the human chain of 11 September 2013). It means they are extirpating the rest, sending them away. I am very happy I was born in Barcelona, that I married a man from Aragon… I am very happy that my mother is from Valencia, or was from Valencia. And I’m very happy that my children studied in Spain. I think with that, I make it quite clear what I think.’

In the same interview, but not in the video, she added, ‘The people of the world should be united, not separated. Chains don’t have to be chains that separate and humiliate. They say there were a million and a half people in that chain. Where were the other 7 million?’

This is not a one-off anecdote. It is just another example of the intolerance the nationalists show towards Catalan dissenters.

If Montserrat’s funeral was fair game for public censure for not being ‘sufficiently Catalan’ (the local media reproduced statements without any kind of stricture), it is because nationalism allows and encourages two attitudes which explain such behaviour:

The Minister of Culture’s xenophobia, which was not decried but simply brushed off as inappropriate by those at the nationalist government dinner.

Universal intimidation, considered so natural by the sectarian José Carreras, who by judging a compatriot’s degree of Catalan-ness simultaneously stigmatises and aims to silence all Catalans who feel Spanish.

They see, they hear, but they do not speak so as not to be labelled anti-Catalan

Before a flag-waving mass enraptured with the illusion of morality and unanimity, it is hard to disagree.

With an eye on the immediate, because one seeks harmony and wishes to steer clear of social isolation.

And at a more profound level, because our opinions are reshaped against our will. For our judgement is formed by, and, crucially, our social integration depends on, observing our environment.

Nor can you disagree when you run the risk of being stigmatised and even losing out on job opportunities, particularly public ones, if you fail to agree with the paradigm dominant among cadres and leaders.

That part of the Catalan population which has plural identities lacks the cohesion and political passion for a single cause which the independence movement enjoys.

But, in their social silence, they feel offended because their tolerance is responded to with contempt for their positions and the bellicose imposition of a dominant social truth.

This is the paradox of the recent success of the hegemonic independence movement. It is doomed to failure because it entails the marginalisation and isolation of half of its own people.

The electoral ceiling which the pro-independence parties have attained has failed to reach 50% for ten years; this we know.

Catalonia will only belong to everyone when it belongs to no-one in particular.